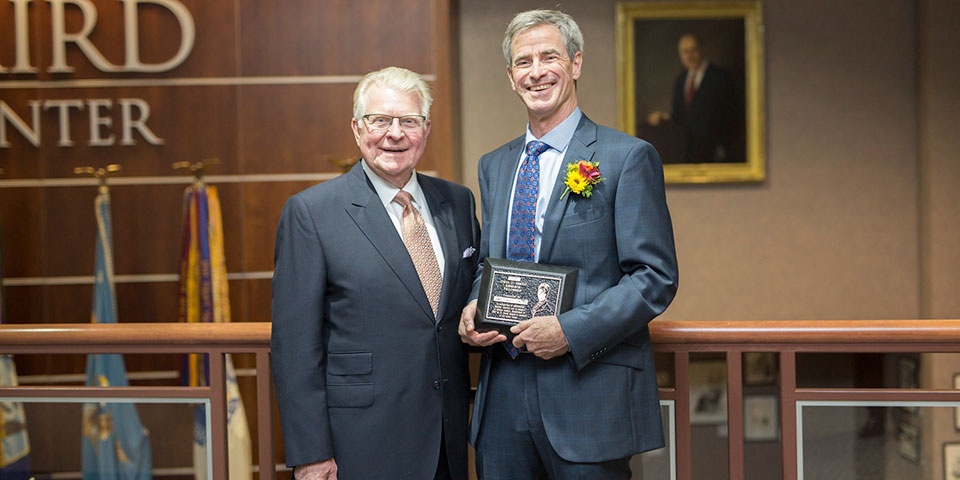 “Epidemiology is a team sport and Jim is the quarterback for much of our research,” said Center for Clinical Epidemiology and Population Health Director Dr. Edward Belongia. “It’s a privilege and honor to have worked with you the past 15 years, and I hope for the next 15 years.”

The fellowship has been given by D. David “Dewey” Sebold since 1988 to recognize an outstanding medical researcher and support continued research in his or her field. Sebold is a former president and CEO of Tombstone Pizza, a company he helped guide to become the No. 1 brand of frozen pizza in America. He also has served on the boards of many organizations, including as an original member of Marshfield Clinic’s National Advisory Council.

Donahue is the 31st researcher to receive the annual Gwen D. Sebold Fellowship for Outstanding Research. Recipients receive $5,000 for continuing research in their field and a memorial plaque presented by Sebold in memory of his sister, Gwen, who grew up in Dorchester, about 30 miles north of Marshfield. She joined Marshfield Clinic as a medical stenographer in 1955 and died in July 1974.

“You should be very proud and you are joining a select group of Marshfield physicians, researchers and scientists who have done so much to improve the lives of thousands of patients around the world,” Sebold said. “Your many accomplishments and contributions to vaccine safety have been a source of national recognition and pride for the entire Marshfield Clinic Health System. You are not only an outstanding researcher, but a skilled epidemiologist, a highly respected colleague, mentor, leader and wonderful friend to all who work with you.”

Donahue, who specializes in vaccine safety research, joined the Research Institute in 2003 to work on the Vaccine Safety Datalink. This is a long-term, Centers for Disease Control and Prevention-funded project to conduct vaccine safety research using large linked databases at health care systems across the U.S.

Over the past 15 years, Donahue has become a leading vaccine safety investigator with more than 36 published research articles since joining the Research Institute. He recently led a near-real time analysis to assess the safety of a new human papillomavirus vaccine. He was invited to present the study results to the CDC’s Advisory Committee on Immunization Practices in February 2018.

In 2015, Donahue was recognized nationally with the Margaret Kolczak Award for his dedication and outstanding performance in epidemiology and biostatistics that contributed significantly to the Vaccine Safety Datalink. He received attention from prominent national media when the results were shared from the CDC-funded study he led that assessed the risk of miscarriage after receiving the flu vaccine.

Donahue credited his epidemiology colleagues and the Research Institute as a whole for contributing to his success.

“These people are so good, they inspire me to do a better job each and every day,” Donahue said. “How can a town seemingly in the middle of nowhere attract such talent? They can go and work anywhere but chose to come to Marshfield.

“Make no mistake, I’m here because of the great people I work with. I’d hate to think where I’d be without them.”