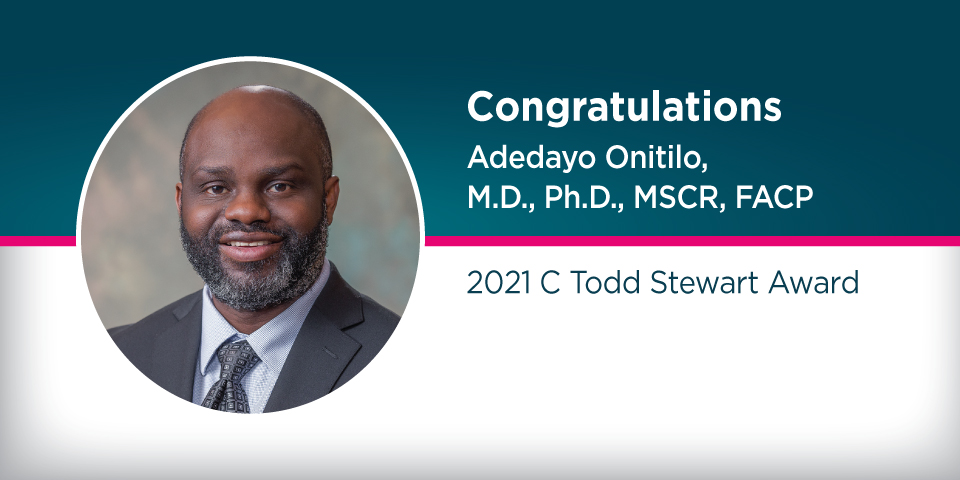 The award honors the legacy of Dr. Charles Todd Stewart, who served his patients and his community as a dedicated pediatric intensivist, passionate child advocate and visionary leader. Dr. Stewart died suddenly at age 48 while serving as Marshfield Clinic vice president. The Stewart family's Janet Stewart and Suzanne Wright, M.D., co-chair of the Stewart Award Committee, presented the award this year.

Dr. Onitilo is an oncology and hematology physician and is heavily involved in Marshfield Clinic Research Institute. He is principal investigator of WinCORP, which provides access to NCI-sponsored clinical trials to more than 680,000 people in Wisconsin, and parts of Michigan, Iowa and Minnesota. He is editor-in-chief for Clinical Medicine and Research, a publication of original scientific medical research. He also holds a clinical faculty position at the University of Wisconsin.

At the award presentation, Dr. Onitilo thanked everyone in the nomination and selection committee process for thinking about himself and other nominated peers.

“There is no higher calling or greater honor than service to humanity," he said. “I believe in equity and fairness at all times."

Sabo Tanimu, M.D., nominated Dr. Onitilo for the award and in the nomination letter, he wrote: “Dr. Onitilo is a role model physician and human being. He has an unparalleled empathy for his patients and in return, his patients love him. His leadership of the Oncology program at the Health System has elevated the image of the clinic with resultant national and international recognition. He has done so both at a personal level and collectively as a group."

“I remember Dr. Onitilo having to miss a meeting one late evening - a rare occurrence for him - to discover that he had driven all the way to Waupaca to check on a cancer patient of his that had been admitted there. He simply embodies the culture of, “Yes.". I don't know that we can fully appreciate the impact he has had and continues to have on the lives of all those he touches."

Many look up to Dr. Onitilo, but during his acceptance speech, he spoke of his great appreciation for his co-workers.

“Leadership is hard, probably more challenging than most people realize," Dr. Onitilo said. “A leader often shies away from the limelight and allows others to flourish, focusing on fairness, flexibility, and doing the right thing for others to the best of their abilities… I appreciate all the physicians, administration, and staff (not in order of importance) that I interact with daily. The interactions have been rewarding even at challenging times."

Jackson said having been able to work with Dr. Onitilo for input in building multiple cancer centers for the Health System, “he seeks to build people and patient experience and not just buildings." Dr. Onitilo is always willing to go the extra mile for his patients, Jackson said.

“Having worked with Dr. Onitilo over the years, I can say without hesitation that he has a complete dedication to healing patients," Jackson said. “He advocates for his patients, their families and our communities daily, in the Clinic, locally, at the state level and nationally. His commitment to cancer research has placed our Health System on the map with the (National Institute of Health) as he is consistently one of the highest accruing cancer providers nationally. Dr. Onitilo's commitment to conquering cancer also crosses oceans, as he has been instrumental to bring state of the art cancer treatments to the country of his birth in Nigeria."

Dr. Onitilo said he is not in the business for personal awards. He wants to do the best for all of the patients at the clinic and bring access to care for everyone, living our mission.

“Our work is not complete as long as we stand in the gap regarding health care in rural communities," he said. “The individuals we care for will include neighbors, family members, sometimes colleagues, and ourselves as long as we all remain human. We, therefore, need to continue to do our best for every single person we encounter every day."

Operations Manager Jeron Jackson summed up what makes Dr. Onitilo best. He is willing to go the extra mile for his patients.