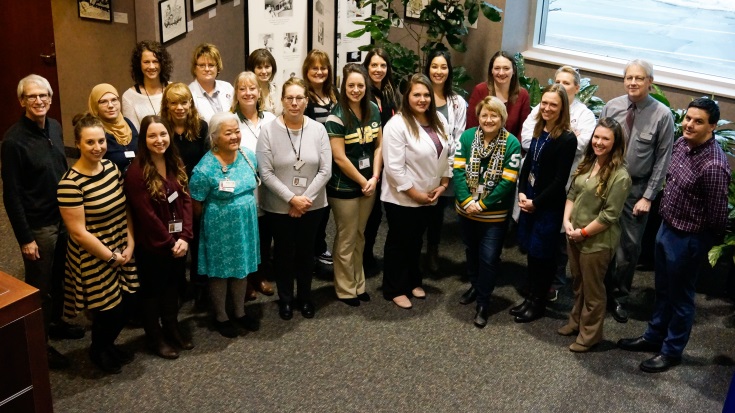 The US Influenza Vaccine Effectiveness (Flu VE) Network study sponsored by the CDC officially began in Marshfield on January 3rd.  Center for Clinical Epidemiology and Population Health staff are actively recruiting patients presenting with cough, cold, or flu like symptoms from General Internal Medicine, Family Medicine, Pediatrics and Urgent Care at the Marshfield Center.  Research coordinators work closely with clinicians and medical assistants to identify patients who may be eligible for the VE study. Nasal and throat swabs obtained from consenting patients are tested for flu by the Integrated Research and Development Laboratory (IRDL). The number of flu positives among those unvaccinated and vaccinated will be compared to determine the effectiveness of the flu vaccine this season.

In 2016, MCRF successfully competed for another 5 year award to conduct flu VE research funded by CDC. Marshfield Clinic was the first US site chosen by CDC to perform flu vaccine effectiveness research in the 2004-05 influenza season, and we were the exclusive site through 2007-08. Since then the Network has grown to five sites around the country.  In Marshfield alone, over 4,000 potential participants are approached each flu season, and over 1,000 are enrolled during the 12 to 15 weeks of study recruitment.  In our first three weeks of recruitment so far this season, we have screened over 1000 potential participants.  Of these, 385 were eligible and 256 were enrolled (66% participation rate). Ten (4%) tested positive for flu.  This is consistent with overall flu activity in Wisconsin, which is starting to increase.

The west coast is already being hit hard with a high level of flu activity, and most cases are caused by A/H3N2. H3N2 seasons tend to be more severe with an increase in hospitalization and deaths. The Marshfield research lab (IRDL) serves as the testing laboratory for a second US Flu VE Network site – Group Health in Seattle, WA. Over 40% of samples from Group Health were positive for flu in early January. We expect a similar high level of flu activity in Wisconsin over the next few weeks. In mid-February CDC will release a mid-season estimate of flu vaccine effectiveness based on enrollments at Marshfield Clinic and the 4 other U.S. sites.